Starting in February 2018 I started to develop a mysterious, severe face rash that conventional doctors could not determine the cause. By March, it progressed and it was very painful…it felt like my face was on fire and weeping blisters developed on my face. It was horrible. I didn’t want to go anywhere. Doctors tried me on all sorts of medications. I also switched out all my makeup and skin care products. Nothing cured it. Additionally, the doctors would prescribe Prednisone, which helped, but as soon as I tapered off, the painful rash would reappear…and worse each time! The conventional doctor finally told me he thought I was developing psoriasis. I refused to believe that. I intuitively knew I was reacting to something.

I spent countless hours researching possible causes on the Internet. I thought maybe I developed an allergy to a certain food. So I went on an elimination diet and for several weeks only ate fruits, vegetables and salmon. I also got allergy tested for cat dander and goose feathers as I theorized maybe I developed an allergy to my cats or to my feather comforter. None of this helped. The burning rash and blisters continued to return.

I didn’t want to return to the conventional doctors. They were at a loss, too. I knew I had to take a different approach.

I found Dr. Lalezar’s website and resonated with what I saw. I had treated with functional medicine practitioners with great success in the past.

Dr. Lalezar cured me and GAVE ME MY LIFE BACK.

Ten years ago I was diagnosed with a nickel allergy. During my Internet research, I studied nickel allergy and saw that many magnets contain nickel. In July 2017 I started wearing magnetic lashes. I thought it was pretty far-fetched that my lashes – with extremely tiny magnets – would be the cause of my face rash. Because my rash didn’t start developing until many months after I started wearing the lashes. And, even though the rash did start underneath my eyes, the rash had spread to many parts of my face, including by my ears, my forehead and underneath my chin.

Keep in mind, even when my face was at its worst, I CONTINUED TO WEAR THE LASHES. I figured because I couldn’t wear makeup, those lashes were the one element of beauty I could easily still wear.

Dr. Lalezar took ample time to meet with me and listen to my medical history. I mentioned my nickel allergy and told her about the magnetic lashes. (Although, again, I still thought it likely wasn’t the cause.)

She submitted my blood for testing and she also had me to a six-hour urine test that would test the presence of many heavy metals in my body.

In the meantime as I was awaiting results of my labs, I contacted the company where I bought the lashes from. They couldn’t help me when I called them, so I emailed the company. Nine days later they responded to me, informing me that the magnets on their lashes were indeed “black nickel coated.”

I decided to stop wearing the lashes to see what would happen. The last day I wore them was April 25, and I was in the middle of tapering off a round of Prednisone. (If the lashes were the culprit, then my nickel reaction would occur three days later per my allergy results regarding nickel 10 years ago.) My Prednisone taper ended April 26.

The rash returned; however, by April 28, the rash would have progressed to the oozing stage. It didn’t. The red, dry, itchy rash appeared in various parts all over my face, but it didn’t burn as bad and it never started oozing. It plateaued. Why didn’t it progress this time? The only thing I changed was I stopped wearing the lashes. Now I was pretty convinced the lashes were the culprit.

On April 30, I saw Dr. Lalezar because the results came in on my heavy metals testing. It revealed that I had an excessive amount of nickel in my body…more than four times the limit a human being should have in the body. It was evident that the nickel-plated magnetic lashes was the primary contributor to my face rash.

After months of obsessive research and dealing with the terrible rash, and with the help and expertise of Dr. Lalezar, I was overjoyed and eternally grateful to have finally found the cause of my ugly and painful face. Needless to say, I immediately threw the lashes away, and Dr. Lalezar started me on IV chelation therapy to expel the nickel out of my body.

A couple of weeks later (by Mother’s Day!), my face was almost fully healed. I will forever be grateful to Dr. Lalezar for helping me solve the terrible mystery of my awful face rash that was ruining my life. Since this experience, I’ve done further research on heavy metal toxicity, and it’s amazing the kinds of health problems people can suffer from due to large amounts of heavy metals in their bodies. It is a contributor to many types of ailments and illnesses. And mainstream medical providers do not address this.

Thank you from the bottom of my heart, Dr. Lalezar and team!!!

Description of Heavy Metal Toxicity and Typical Approaches to Treatment

How do I find out more about Nickel Allergy and Heavy Metal Toxicity?

Call the Health & Vitality Center at 310-477-1166 or click here to schedule an appointment. We are one of the leading centers for natural medicine in Los Angeles. Doctor Shiva Lalezar is a holistic doctor who helps relieve symptoms by correcting the problem at its source. Nickel allergy and heavy metal toxicity can be managed using conventional methods, or successfully treated through Dr. Lalezar’s superior understanding. Our practice uses an integrative approach, combining the best conventional therapies with the latest techniques and treatments in functional medicine for optimal results. 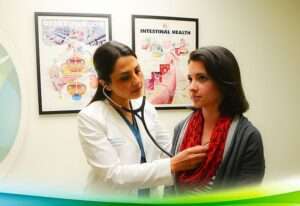